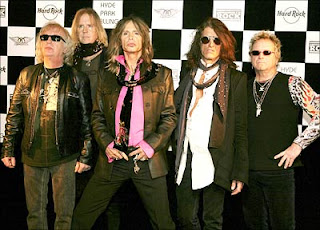 AEROSMITH are regrettably unable to perform their February 1 headlining show in Caracas, Venezuela at The Hippodrome as part of Solid Fest. This is due to lead guitarist JOE PERRY having to undergo emergency surgery on his knee caused by unforeseen complications from a previous surgery on the same knee.

In March 2008, PERRY underwent total knee replacement surgery, an operation he put off for two years so that he could fulfill the band’s live commitments and perform for fans.

AEROSMITH was looking forward to their performance in Venezuela–especially because it would have marked their first-ever show in the country—and they hope everyone at the Solid Fest has a great time. The band is also hoping to announce a future show in Venezuela and they want to thank fans for their understanding and support.

Says STEVEN TYLER: “We are very happy with everything related to the show, the euphoria of the fans, how they have responded to our website with great expectations and the production company that we chose, that has been working very well on this show for the past three months. Playing Venezuela was my idea of a perfect way to start the New Year. But having heard Joe had to revisit the hospital this month, the band are truly disappointed we can’t be in Caracas, and we hope to see everyone there soon.”

Spanish band La Oreja de Van Gogh is currently preparing their new album, to be released early September 2008. At the same time, it is still unknown who will be the new main vocalist of this band from San Sebastian. … END_OF_DOCUMENT_TOKEN_TO_BE_REPLACED