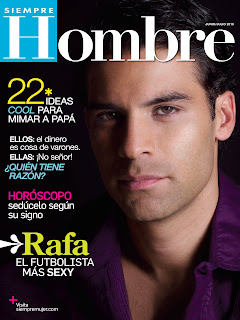 NEW YORK, June 9 /PRNewswire-HISPANIC PR WIRE/ — For the second year in a row, Siempre Mujer's June/July issue includes a special magazine-within-a-magazine dedicated to the men in Latina women's lives. The "Siempre Hombre" flip issue of Siempre Mujer unveils Mexican National Team Center Back Rafa Marques as the Sexiest Soccer Player, as chosen by the readers of the magazine. He beat out nine other players including Kaka (Brazil), Fernando Gago (Argentina) and Roque Santacruz (Paraguay).

The pages of "Siempre Hombre" include a profile of Marques, along with a Father's Day gift guide, love horoscopes and a piece on common financial mistakes that men make.

The cover of Siempre Mujer features Actress Ana De La Reguera, whose career has skyrocketed since the last time she appeared on the cover in February/March of 2008. She starred in Cop Out with Bruce Willis and Tracy Morgan and Othello on stage in Mexico, and landed contracts with CoverGirl and Lipton Iced Tea. Highlights from the Siempre Mujer story follow:

On destiny: "Yes, I believe it exists, but that it can adapt to our desires."

On boyfriend Jorge Ramos, anchor of Noticiero Univision: "He's my biggest personal supporter, aside from my mother. He always tells me that this is my time to professionally shine."

On the secrets to a long-standing relationship: "My mother says it's distance. We have to keep juggling schedules and itineraries, between Miami and Los Angeles, but I think I'm very independent and guys like that because they don't have to be everything."

The June/July issue of Siempre Mujer is on newsstands now and also includes stories on beauty fixes for beach days, how to live a longer, healthier life and how motherhood leads to professional success. For more, please visit siempremujer.com.